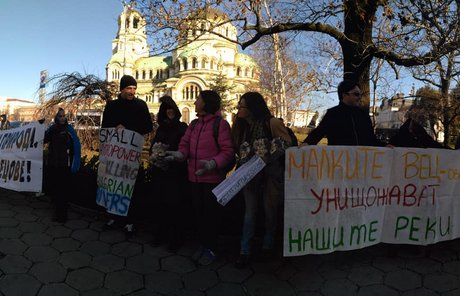 BALKANKA anglers club and NGO’s coalition “For the Nature”, with SEENET member BALKANI Wildlife as part of the coalition, organised a protest in front of the Parlament in Sofia, Bulgaria, on February 13 against recently proposed amendment of the national Water Framework Law.

The protest was organized in Sofia, in front of the Bulgarian parliament opposing the amendment of the national Water Framework Law allowing 43 sHPPs, which are situated in NATURA 2000 areas and whose water permits are expired – to continue working. Furthermore, the amendment makes possible the construction of about 300 additional sHPPs in NATURA 2000 sites. Parliament had to vote on changes to the national Water Framework Law to allow the operation of already built and the construction of new small hydropower plants. The proposal was met with protest letters from civic organizations and a negative opinion from the Ministry of the Environment. On the very day of voting, the proposal was withdrawn and was not voted at all in Parliament. It is a success for now but NGOs remain ready for new protests if the proposal is submitted again.

However, these restrictions are met with resistance from a large number of influential political figures – former and current MPs, who have business with small hydropower plants. More than 43 small hydropower plants in NATURA 2000 will now have to cease operations due to the expiration of their water use permits and the ban on the issuance of new ones. The bill to change the law was tabled by the scandalous politician and nationalist Mr. Valery Simeonov. Although a minority in the Bulgarian Parliament, his party is a part of the government. One year ago, Valery Simeonov was still the Deputy Prime Minister in the government when he scandalized the public with his insults and attacks on various civic groups – environmentalists and especially against protesting mothers of sick children. Although he had to resign because of his outrageous statements and leave the government, he continues to lobby for the dirty business and private interests of politicians in power.

This is a great action and from SEENET all the support to our Bulgarian colleagues and to all involved in this case with congratulations for the success!